I am Norihiro Takeda. I offer study tours and information about Rwanda, Africa.

Household air pollution is a bigger issue than you think!

Firewood used at a target household

The purpose of this field research is to use cleaner cooking stoves and compare the air quality with a censor to tackle this issue of air pollution. There are two types of sensors used in the field research: a type to connect an Android smartphone and measure with a special application and the other game-machine type measuring equipment with the game characters changing depending on the level of air pollution.

This time, we conducted interviews on the everyday cooking environment and level of air pollution as the baseline survey before using cleaner cooking stoves.

A house of the Mukamurara Family located at the bottom of Mt.Kigali, west part of Kigali

The interviews were conducted by an interpreter, Satoka Oe in Kinyarwanda, a national language of Rwanda.

This family mainly uses firewood as the main fuel and charcoal in some cases.

Using two clay cooking stoves called Imbabura in Kinyarwanda, they were boiling beans in one cooking stove with firewood and cooking porridge called Igikoma with water and powders of sorghum, soya and corns, and sugar in the other stove with charcoal. We were served 2 cups of Igikoma, Rwandan sweet and nutritious porridge in a mug.

Difference between firewood and charcoal (price and volume of fume)

Firewood and charcoal are used differently as follows.

Almost all items for symptoms we prepared beforehand were applicable.

This interview gave us new findings that firewood releases more fumes than charcoal, causing more serious symptoms. When I approached firewood during cooking, tears came out and my eyes were burned.

The following is Mukamurara’s thought-provoking comments.

After the interview, we strongly felt that we need to educate people about the health risks caused by cooking using firewood and charcoal and specific solutions. The air pollution concentration we measured with a sensor showed us how serious this problem is. The following are the results.

Measuring with the sensor, we now know that

【What is the AQI?】
The AQI is an index called Air Quality Index. The AQI value over 100 is ‘Unhealthy for Sensitive Groups’ i.e. those with underlying conditions such as chronic heart or lung ailments; transient symptoms of irritation e.g. eye irritation, sneezing or coughing in some of the healthy population. Over 150 is ‘Unhealthy’. Over 300 is ‘Hazardous’. In Kigali, the AQI is usually over 100. My house located near the main road has the AQI value around 150.

The sensor showed the value of 2,000 at maximum though I could not film well.

Kigali is known for its high air pollution with the usual AQI around 150. However, we were quite shocked by the figures of 2000, 10 times of the Kigali’s AQI near the burning firewood. We were able to observe how cooking using firewood releases air pollutants.

A layout of air pollution concentration

The following layout is each measuring point of the house.

The following layout shows the average values after measuring twice at each point. Measurement is done 1m high from each point. This height is just the same as that of a person using the fire bending over.

The highest value was 177.5 at Point A in front of burning firewood. It can be said that firewood has higher health risks than charcoal as Point E in front of burning charcoal was 160.0. Surprisingly, the value of indoor, Point D (=166.0) was high. The polluted air might easily accumulate inside the house. This result shows that staying indoor is not necessarily safe.

Next, the following is the results of measurement of PM2.5 value in the same way.

Point A in front of firewood was the highest, and Point D, indoor was the second highest.

The following is the table of the results of all measurements.

We also measured the time to boil water as another research item. It took 3 minutes 45 seconds to boil 500ml of water.

Next time, we will create a cleaner cooking stove and compare its performance with a traditional cooking stove.

We only conducted a baseline survey this time. Next time, we will create a cleaner cooking stove, the main part of this research. We will try to create a ‘Kamado Yoko’, a cooking stove developed by a JICA (Japan International Cooperation Agency) volunteer in Madagascar before, in Rwanda. *Kamado means a cooking stove in Japanese.

We will create this Yoko Cooking Stove that we will ask Mukamurara to use for a while. After that, we will compare the same survey to compare the results. This is my first time to create a cooking stove so I am worried if the level of air pollution can really be improved. I will try with everyone’s help. I hope it will be great so please stay tuned!

We created Kamado Yoko and waiting 1-2 weeks for it to dry. 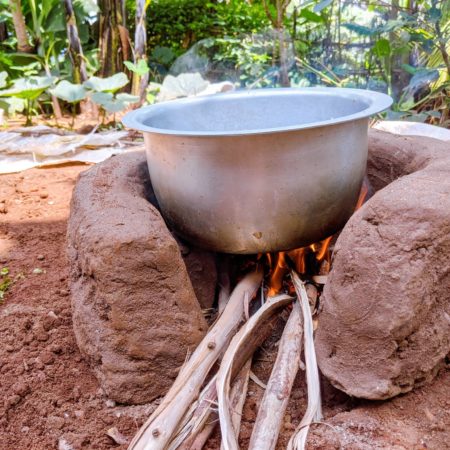